Melissa Clark and Erica Ehrenbard discuss their work on a series of wood panel installations made for the University of Washington.

To accommodate its growing undergraduate population, the University of Washington commissioned KieranTimberlake to develop housing for the northern edge of its Seattle campus. This project, which came to be known as the New North Campus, includes a new master plan and series of residence halls, each with a mix of building-specific and campus-wide programming, as well as a network of outdoor spaces designed to foster community and attract students to an underutilized portion of campus. Last fall marked the completion of the project's first phase, and we celebrated the opening of Madrona, McCarty, and Willow Halls.

As designers, we form lasting connections with our clients and projects as they unfold over time. When the first part of this multi-phased project drew to a close, we wanted to mark the occasion with a tribute to the special relationship between the University of Washington community and the stunning landscape that surrounds it. Much of our work centered around the desire to seamlessly integrate the new buildings into the forested, steeply sloped site while preserving views of the ever-present Cascade and Olympic Mountains. We found an opportunity to honor this unique circumstance with a series of wood panel installations that celebrate those natural features and offer moments of pause in the main lounge spaces of each building.

Each panel is carved to reflect the topography of different peaks visible from campus: Mount Rainier, the Brothers, and Glacier Peak. We used digital samples of the mountains' terrain to create texture, with carved timber representing changes in elevation and metal inlays depicting valleys and low points. While their placement and orientation throughout the lounges varies, each panel frames a window to create a “portal within a portal” that reflects the landscape at large.

Like other projects at KieranTimberlake, the fabrication process began with a series of mockups to study material, detailing, and composition. After landing on white oak panels with blackened steel inlays, we visited a lumberyard to hand-pick three reclaimed timber beams, each of which was sawn lengthwise and kiln-dried at the yard. Back in our fabrication studio, we processed the lumber on a computer numerical control (CNC) router and joined pairs of beams for each panel. The reconfigured beams then went back on the CNC machine, which carved each panel's unique topographical geometry. Once the CNC work was complete, we expeditiously chiseled, sanded, and finished the wood in preparation for the laser-cut inlays that we blackened and sealed before adhering them by hand into the panels. 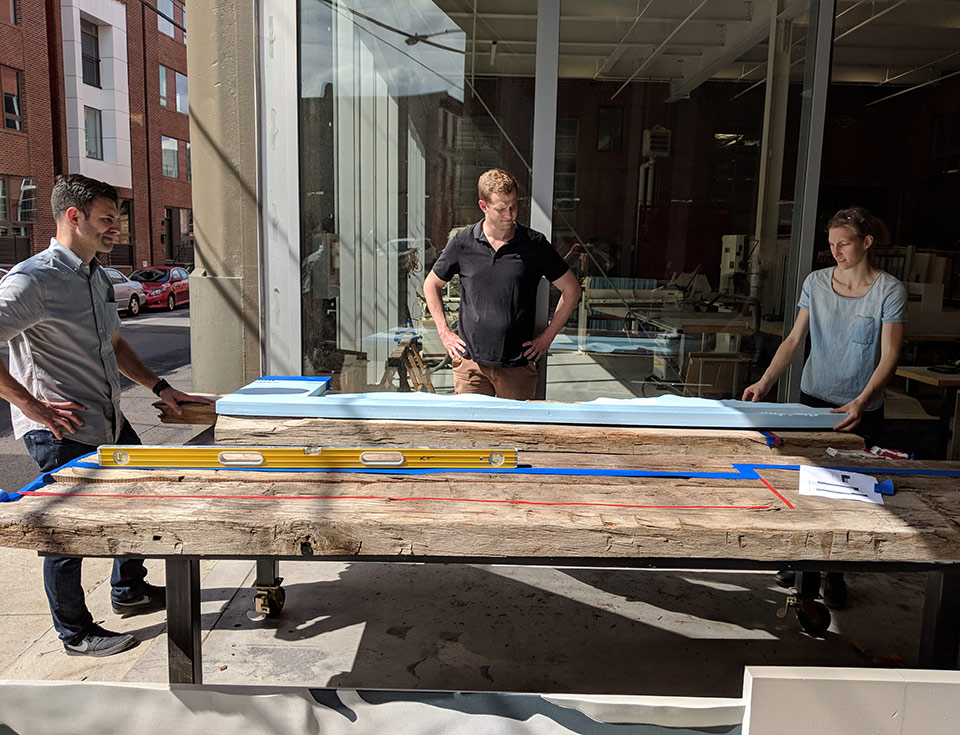 The fabrication process began with full-scale foam and acrylic mockups. After finalizing the design and materials, we set to work joining beams, carving elevations on our CNC router, and hand laying the blackened steel inlays.

This fabrication process is one example of the ways we as a firm combine traditional craftsmanship with digital fabrication techniques in our projects. When working on a campus as large as the University of Washington, we look for moments like this one to create an intimate detail or handmade object to memorialize the inspirations and discoveries we have while working on our projects.

The whole article (by @dr_danieldavis) featuring the boom in modular housing design, is well-worth a read! https://t.co/gchezakgeI

The designs are customized to the client’s preferences and needs, constructed off-site in Bensonwood’s efficient, s... https://t.co/LnuUDzy3CT

Thinking about how to design and build better is part of our DNA. As detailed in refabricating Architecture (McGraw... https://t.co/RnWCfDTbBA