In Philadelphia, residents' life expectancy is a product of their zip code. That's what Dr. Bon Ku and Kr. Robert Pugulsi of Thomas Jefferson University's JeffDESIGN and Health Design Lab found while researching the health of Philadelphia's lower income communities, where life expectancy can swing as much as 20 years between neighborhoods.

CoLab Philadelphia is an initiative born out of this research that aims to bring health and wellness outside of traditional medical facilities and directly into the neighborhoods that need it most. The Community Design Collaborative convened the New Kensington Community Development Corporation, Impact Services, Thomas Jefferson University's JeffDESIGN, KieranTimberlake, Ballinger and Cohere to convert an Airstream trailer into a mobile, multi-use platform that builds healthier communities through creative placemaking.

“Health services are not readily accessible in a number of communities,” said Georgeanna Foley, a member of the design staff and leader of KieranTimberlake's CoLab team. “We wanted to design a creative, mobile, wellness-centered space, but faced a number of questions: What is a mobile health service? What issues should it address? What is health at the community level?”

To answer these questions, we met with Kensington residents to discuss what makes a community healthy, what residents need to lead healthier lives, and what role they saw CoLab Philadelphia playing in their neighborhood, as well as how designers, policy makers, non-profits, and healthcare providers can work together to bring wellness into different neighborhoods.

“Initially when I thought of a mobile health lab, I pictured a clinic taking blood pressure and handing out pamphlets,” Foley said. “But this project is actually about way more than that—it's about creating a place that can host conversations about health.” She added that health can be defined in a number of ways, from well-known physical metrics such as weight, cholesterol, or eyesight, to more stigmatized aspects of wellness, like mental health. “What we've found in listening to the community is that one of the most important things we can do is give residents the ability to speak up about what they need,” she said.

This past summer, CoLab rented an Airstream shell to test out some of these community-driven ideas (and the logistics of driving a 26-foot-long trailer through the streets of Philadelphia). They also wanted to begin building a presence in the Kensington community. “A large part of the project was figuring out how to build community trust,” Foley explained, adding that the rented trailer's design was somewhat of a hindrance. “A trailer out in a park and all the doors closed is private, but doesn't exactly scream ‘safe space.' Something attractive and inviting can become more of a safe space than a closed off room, and can feel more accessible,” she said. 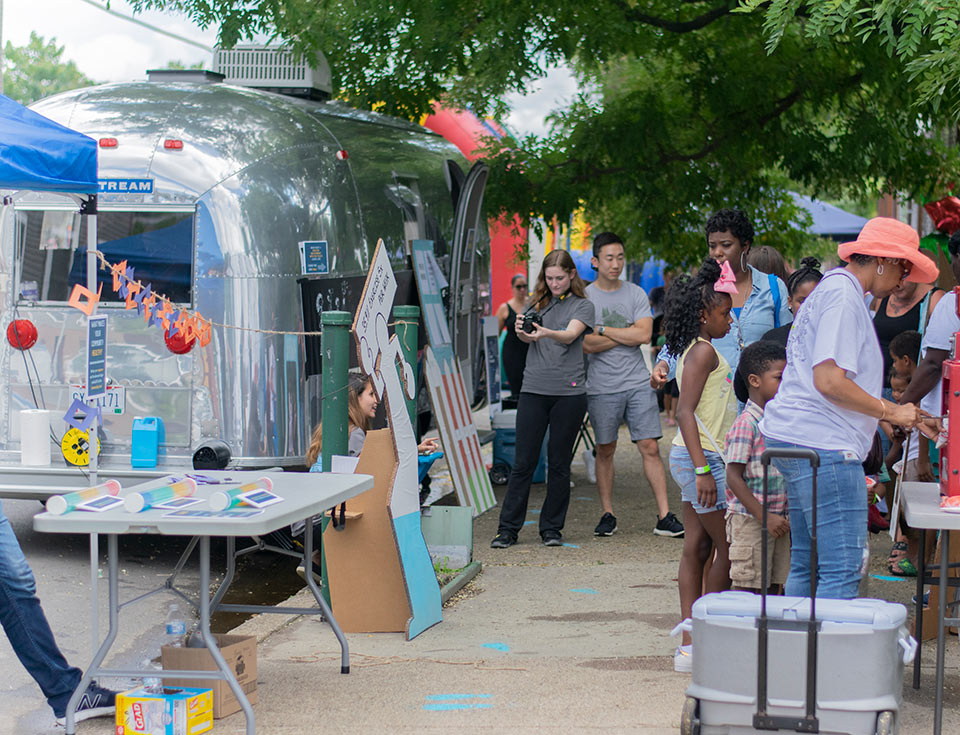 This past summer, CoLab rented an Airstream shell to test different programming options. The experience influenced design as our team realized what features would be the most helpful to the community as well as healthcare providers.

As a result, our design focused on creating an extremely flexible, welcoming, and approachable space. Two hinged doors, or gull wings, on one side of the Airstream ensure the trailer is wheelchair accessible, but also let the Airstream adjust to its programming—with both gull wings open, the trailer becomes an open and welcoming space that draws community members in, but healthcare providers have the option of closing one or both wings when the Airstream hosts screenings or other services that may require more privacy.

Opposite the gull wings, we incorporated a full-length storage wall that supports the need for flexible storage, and also gives the CoLab the chance to design a pattern, design, mural, or branding that will be fully visible when the trailer is opened up.

With the design completed, the Airstream is officially under construction and is anticipated to be completed and in action in March of 2019. While its official programming is still under discussion, it will likely bring programs such as farmer's markets, health screenings, workshops, and awareness campaigns to Kensington and other underserved communities. “We want to be able to provide more than basic medical testing,” said Foley, “but the first step is just getting people inside.”

We are proud to announce that @CTBUH has awarded the US Embassy in London with a 2020 Award of Excellence! "The Emb... https://t.co/QvB4lXdGsH

RT @archinect: The U.S. Embassy in London receives a 2020 Award of Excellence from Council on Tall Buildings and Urban Habitat @CTBUH @KIER...

The whole article (by @dr_danieldavis) featuring the boom in modular housing design, is well-worth a read! https://t.co/gchezakgeI

The designs are customized to the client’s preferences and needs, constructed off-site in Bensonwood’s efficient, s... https://t.co/LnuUDzy3CT