How can we predict the future species composition of a green roof?

A green roof is an experiment in thinking over time. All components of the system must be carefully planned to create an environment that supports the needs of the building, occupants, and vegetation. But no matter how well a green roof is specified, it is a living system that experiences growth and change due to weather, insects, disease, competing plant species, and maintenance activities. The role of vegetative dynamics in the long-term health of a green roof is essential to its sustainability and persistence.

While plant communities change and evolve, a green roof should achieve a state of dynamic equilibrium and should meet baseline performance goals as it matures—ideally growing in resilience and diversity.

Green roofs have traditionally been approached as engineering or horticultural challenges rather than ecological systems. The majority of published research focuses on easily replicable, shallow-tray, sedum-dominated systems with minimal diversity. These are studied in highly mediated small plots—systems that bear little resemblance to the context and complexity of actual green roofs. As a result, many aspects of how green roofs function as ecosystems and how they change over time are not well understood, and this lack of understanding impacts our ability to design long-lived, high-quality green roofs.

With this in mind, we initiated a research project to study the long-term plant dynamics of green roofs and, in the future, to investigate their relationship to building performance over time. We conducted vegetative surveys of six green roofs, some of them nearly ten years old, on KieranTimberlake buildings at Middlebury College, Cornell University, Yale University, and the University of California, San Diego. These green roofs represent different ages, assemblages, design intents, plant selections, and maintenance regimes. In each roof surveyed, we sought to understand the current state of plant health, the relationship between the original plantings and emergent vegetation, and the trajectories of plant communities and systems in relation to the goals of the green roof, particularly concerning ecological resilience, habitat creation, and biodiversity. 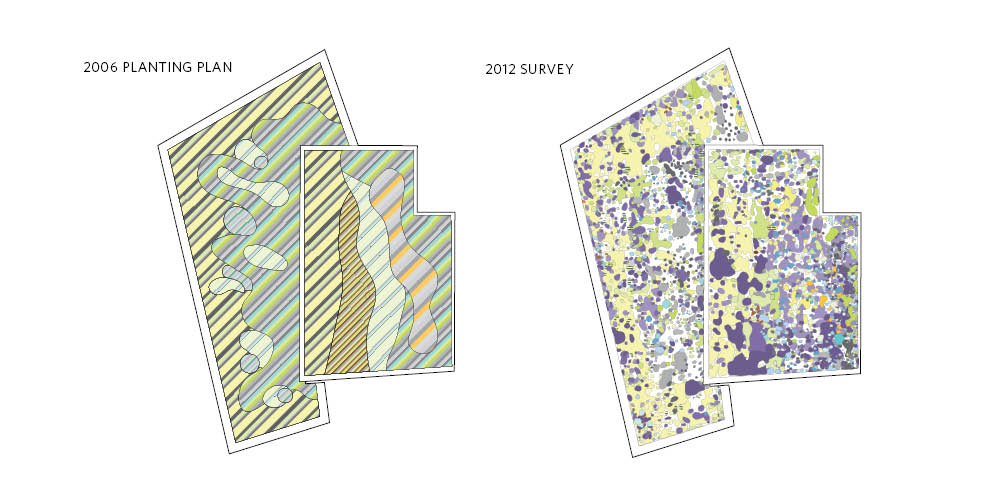 We took a full species population inventory of each roof and conducted interviews with facilities, grounds, and maintenance personnel. Afterwards, field data was compiled to generate spatially explicit maps of each roof in order to further analyze plant communities, including general vegetative cover, species distribution and relative cover, species richness, and biodiversity. All of these characteristics are a proxy for overall roof performance.

While many of the dynamics surveyed are properties of plant behavior and morphology, they are also direct products of design decisions—ranging from building orientation, location, and massing, to nuanced details of green roof assembly lay-up or growing media specs. Architectural design creates microclimates across a roof, determining availability of sunlight, water, and nutrients.

The question now becomes, How will we design differently based on what we have learned?

This project has been shared via the following peer-reviewed publications: