Harvard University's residential housing system includes twelve residential houses, each endowed with its own character and culture that provide undergraduate students with a smaller community within the university as a whole. Following their freshman year in one of the dormitories in Harvard Yard, students transfer to a residential house, where they remain for the rest of their college careers. As part of a larger House Renewal project at Harvard, we recently completed a full renovation of Stone Hall (formerly Old Quincy Hall), a project which improved the living spaces within the building and added social spaces and a smart classroom in the previously underutilized basement.

The building is five stories, each of which includes two historic fireplaces—used for heating in the past but now decorative. Early in the design process, a desire emerged for a graphic treatment representing the history of the house to be placed above the mantles of these eight fireplaces. Through a brainstorming process involving members of both Harvard University and KieranTimberlake, we developed the idea to create sculptural wall panels using thousands of old room keys used by former residents.

We derived the linear key patterns from classic brick patterns found in architecture, while the radiating circular patterns were based on geometric patterns often found in mosaics and tile work. We modeled the panels digitally using Adobe Photoshop, and then refined the design in Adobe Illustrator.

Artwork for Harvard House Reflects History from KieranTimberlake on Vimeo.

Our team built the panels in our fabrication studio using three-quarter inch birch plywood. A custom finish comprised of clear polycrylic combined with black dye was then added to the panels to give them a dark grey color to complement the shiny brass finish of the keys. The digital patterns were then transferred to the eight wood panels. We meticulously glued the keys onto the panels by hand, using a high-strength methacrylate glue. 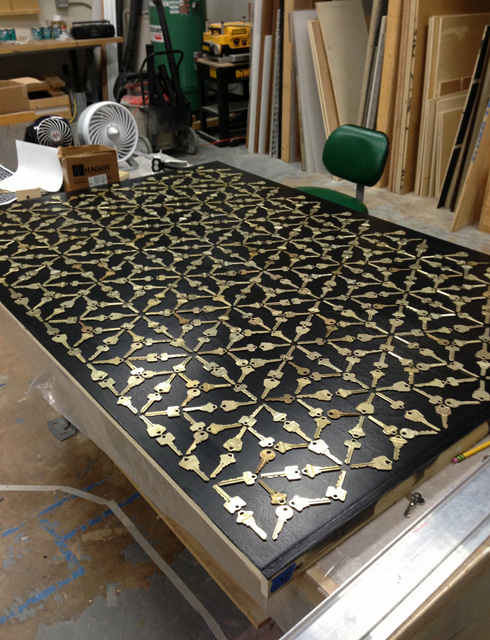 A completed panel dries in our fabrication shop.

In total, 6136 room keys were used in the patterns. To allow light to reflect off each key, creating a twinkling effect under certain lighting conditions, the panels were left uncovered by protective glass. Once complete, we transported them to Cambridge for installation.

A modern interpretation of Stone Hall's history, the panels that now appear over the historic fireplaces provide an artistic link to the past and the thousands of students who have carried keys to the house during its first 80 years.

RT @RIBAginny: My copy of #EnergyModelling arrived yesterday and I’m still not over how pretty (as well as useful and informative 😏) this b...